Do you encounter a frozen app on your Mac and can’t quit it normally? That spinning beach ball makes you crazy? Instead of just sitting and getting more frustrated, force quit an app that’s not responding. Thankfully, you’ve got options to close the unresponsive apps.

We’ve prepared five Mac force quit ways, so you can pick the one that works best for you. Moreover, we’ll tell you how to prevent the programs from hanging and what to do if your whole Mac stops responding.

How to Force Quit Mac Applications

Force quit from the Apple menu

Here’s how to force quit an app from the Apple menu:

Force quit from the Dock

If you wonder how to force quit an app on Mac using the Dock, check out these simple steps:

As simple as that! 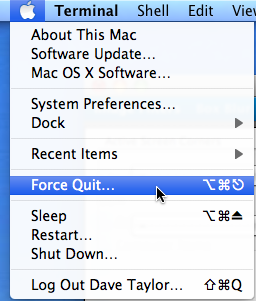 Alternatively, you can use a force quit Mac shortcut to close an unresponsive app. Do the following:

This method of force quit command Mac is especially useful if your mouse cursor is lagging a bit.

If you prefer a command line method to solve the problems, you can quit an unresponsive app via Terminal. Here’s what you should do:

Note that the killall command works at the system level and the auto-save option doesn’t work. Be careful not to lose your unsaved data.

A smart maintenance app like CleanMyMac X has a problem of force quit on Mac covered. You can easily force quit program on your Mac with an Optimization utility. It has a special Hung Applications tool that allows to identify and fix the unresponsive app right away.

A direct access saves you time and allows to fix a frozen app in a matter of seconds. CleanMyMac also takes care of other performance issues, so if you want to get alerts when something goes wrong on your Mac, download CleanMyMac X for free and give it a try.

You may notice that a particular app freezes quite often. It is natural to assume that there is something wrong with that application. But don’t worry, there are a few things you can do to fix the hanging app.

First of all, update an app to the latest version. App developers are constantly working on improvements, trying to deliver the best experience to users. The latest update may resolve all problems with the freezing app.

The next step is to clear the app’s cache, especially if you use it frequently. If there’s not enough free storage, a program won’t run smoothly. Once you delete the cache files, an app may start working normally.

You may also try to delete an app and reinstall it. Usually it resolves the problem of a frozen app.

What to do when your Mac freezes

Typically it’s just an app that hangs, but on rare occasions the Mac may freeze entirely and become completely unresponsive to anything. This is often accompanied by fans that work quite loudly, demonstrating a fully frozen Mac. To solve the problem, you need to shut down your computer and boot it again.

Here’s how to force reboot your Mac:

As you may presume, this method is not perfect. Any unsaved information may be lost due to the sudden shutdown. However, sometimes it’s the only way to make your computer running.

That’s it. We hope this guide has helped you to force close Mac app that’s not responding. Keep in mind, with regular maintenance, your computer will be at tip-top shape, running at its best. And software like CleanMyMac X can help you keep an eye on your Mac. It can reset and delete apps, free up RAM, clean up the system, take care of the startup programs that slow down your computer, and speed up your Mac with its maintenance scripts. And that’s what will help you avoid problems with frozen apps on your Mac.

Thanks for reading and stay tuned!

Even if you’ve got the latest Apple Watch, apps can still freeze up from time to time. With the process being notably different on watchOS compared to iOS, follow along for how to force quit Apple Watch apps.

Force quitting an app on iPhone or iPad is as simple as closing out apps from the multitasker. While it looks similar, removing apps from the Dock on watchOS doesn’t actually force quit or close the apps, but just removes them from the most recently used list of apps.

If you’ve got an Apple Watch app that is frozen or keeps crashing on you unexpectedly, you’ll want to use the following steps to force quit it.

If you’re still having trouble, give a shot to restarting your Apple Watch. Finally, if that doesn’t fix it, Apple recommends checking for app updates.

For more help getting the most out of your Apple devices, check out our how to guide as well as the following articles: